Before I talk about how I broke my project, I want to talk a bit about the speech itself.
I chose Helena’s “How happy some o’er other some can be” speech from Act 1 Scene 1. It’s one of my favourites because I think it is one of the most true to life depictions of love in Shakespeare. I feel like Helena because of this speech. It talks about loving and being hurt by that love, and shows that love isn’t totally perfect. She speaks from a place of experience rather than one of innocence. However it does have other interesting qualities that I’d like to discuss.
The most important thing is that it consists of rhyming couplets. This rhyme scheme is generally found in the forest, at first spoken by the fairies and then later by the lovers as they spend more and more time in the forest and under the spells of the fairies. What strikes me as the most odd is that this speech isn’t spoken in the forest at all, it’s well before they all leave, so why is there the rhyme scheme? Is it because she’s speaking about love? Or because this is where the main plan is laid to get all four lovers into the woods?
I feel like she takes a big risk with this speech. She knows that there’s the potential to really hurt her best friend Hermia, but she’s felt so hurt by Demetrius (and therefore Hermia) that it’s worth the risk. And it’s worth the risk for her also to hopefully win back Demetrius’ love.

Butterfly
To destroy this beautiful text, I decided to cut it up, and make it into 4 small origami butterflies. I think of butterflies as the closest thing to fairies that exist, and also something that would exist in the forest which she discusses. I chose to do 4 of them for two reasons: because it forced me to cut up the speech even more, and because it represents the four lovers (even though Lysander isn’t mentioned, he is implied by her talking about “their flight”). 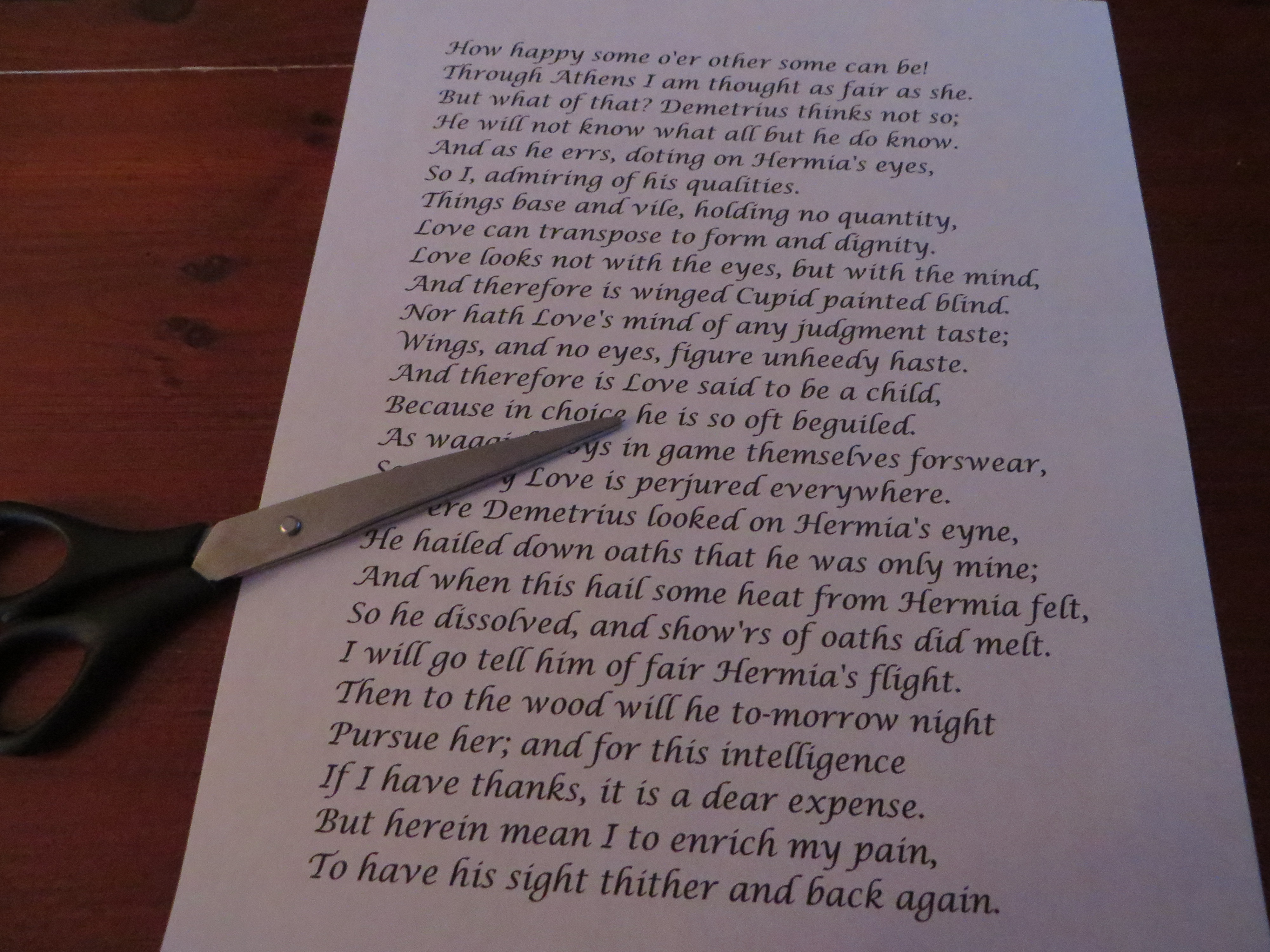 So I started with a printed version of the text, in a font that I thought was beautiful and feminine like Helena herself. 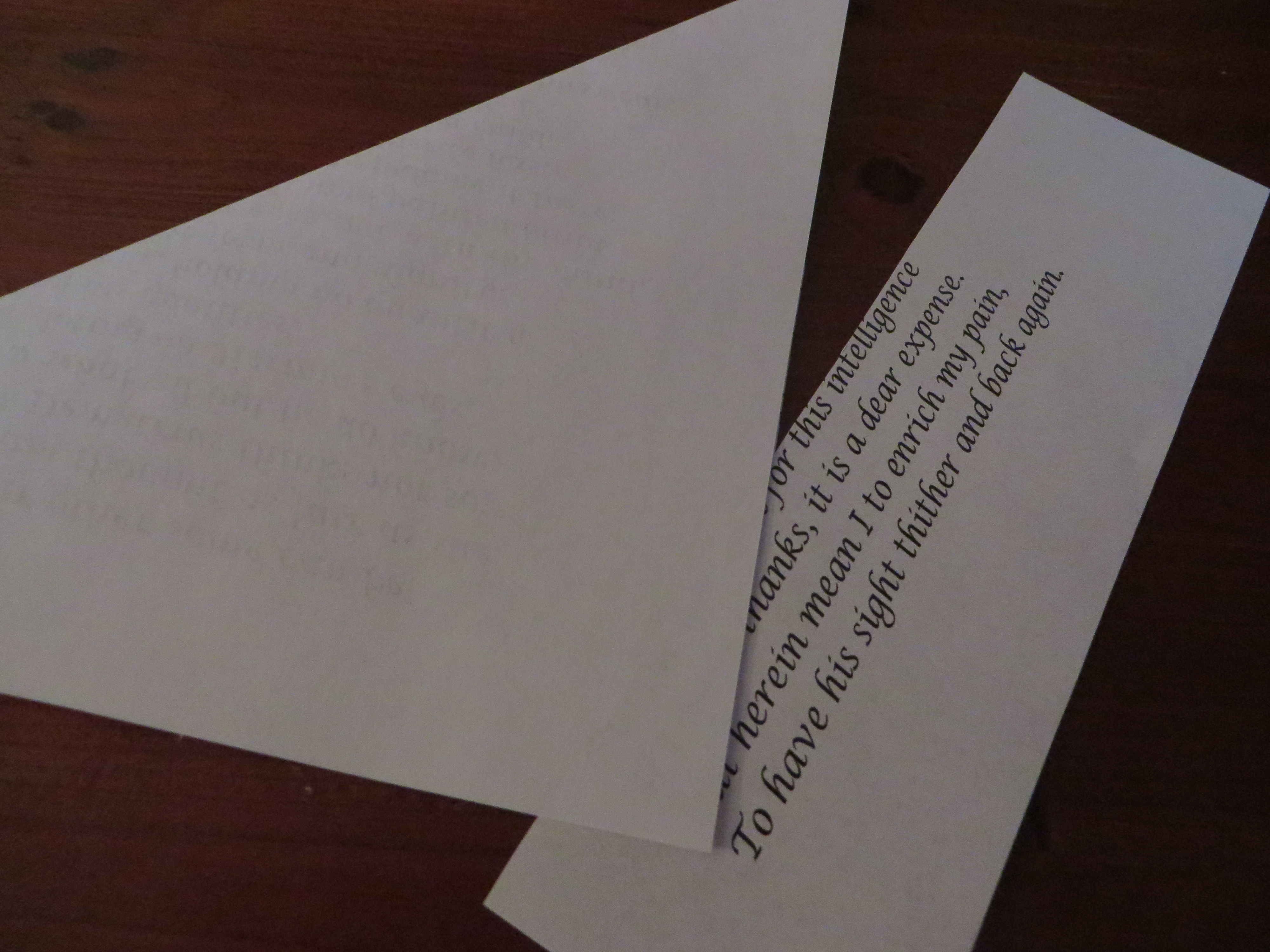 Next I cut the majority of the paper into a large square from which to make the four small ones. The last 4 lines got left on that cut off piece, and so therefore weren’t even a contender in being analysed with the rest of the text. 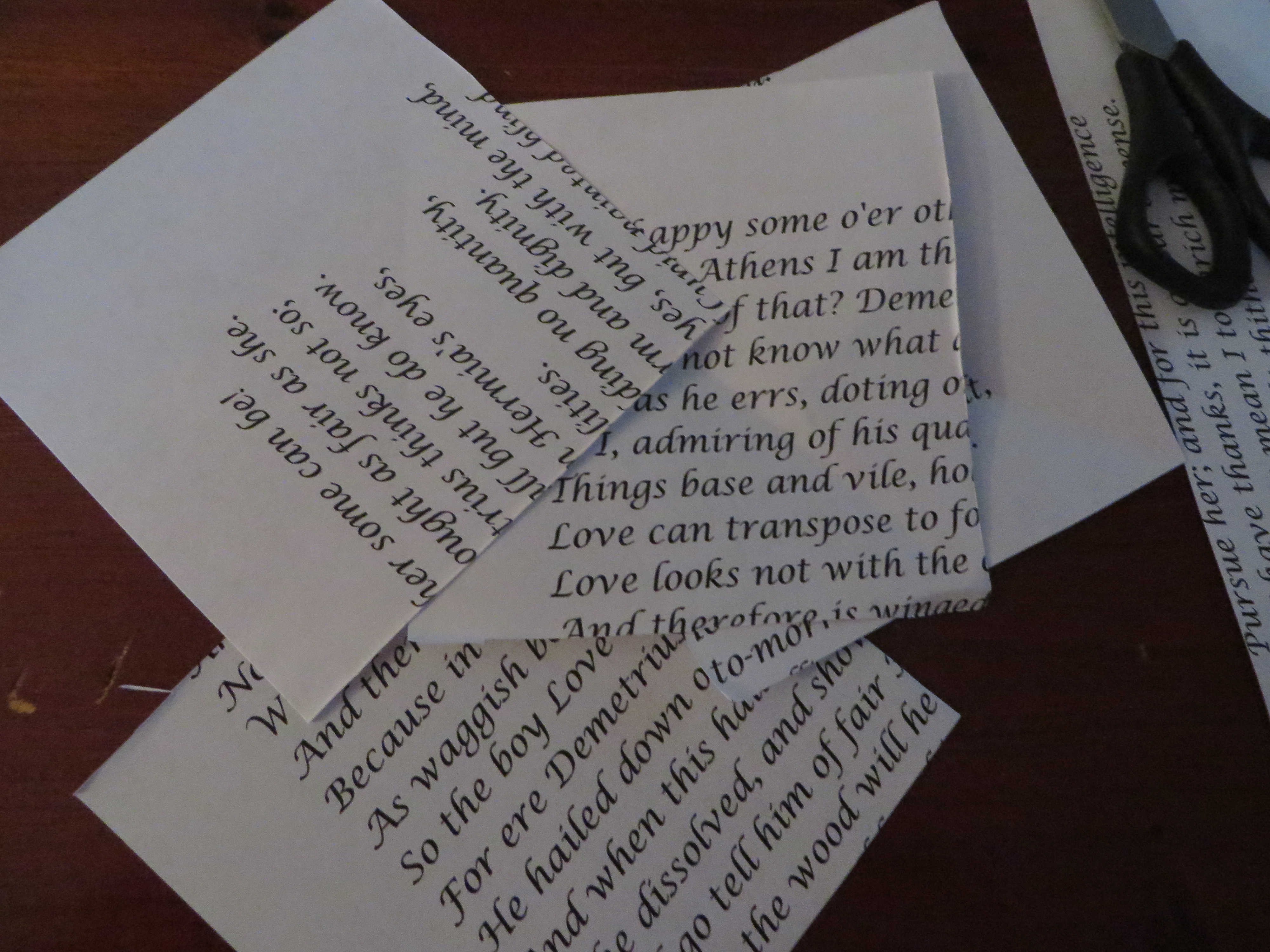 Here are the four squares all cut up and ready to be folded. As you can see, there are only a few words per sheet, and some of them have even less than others because the lines don’t run to the edge of the page. 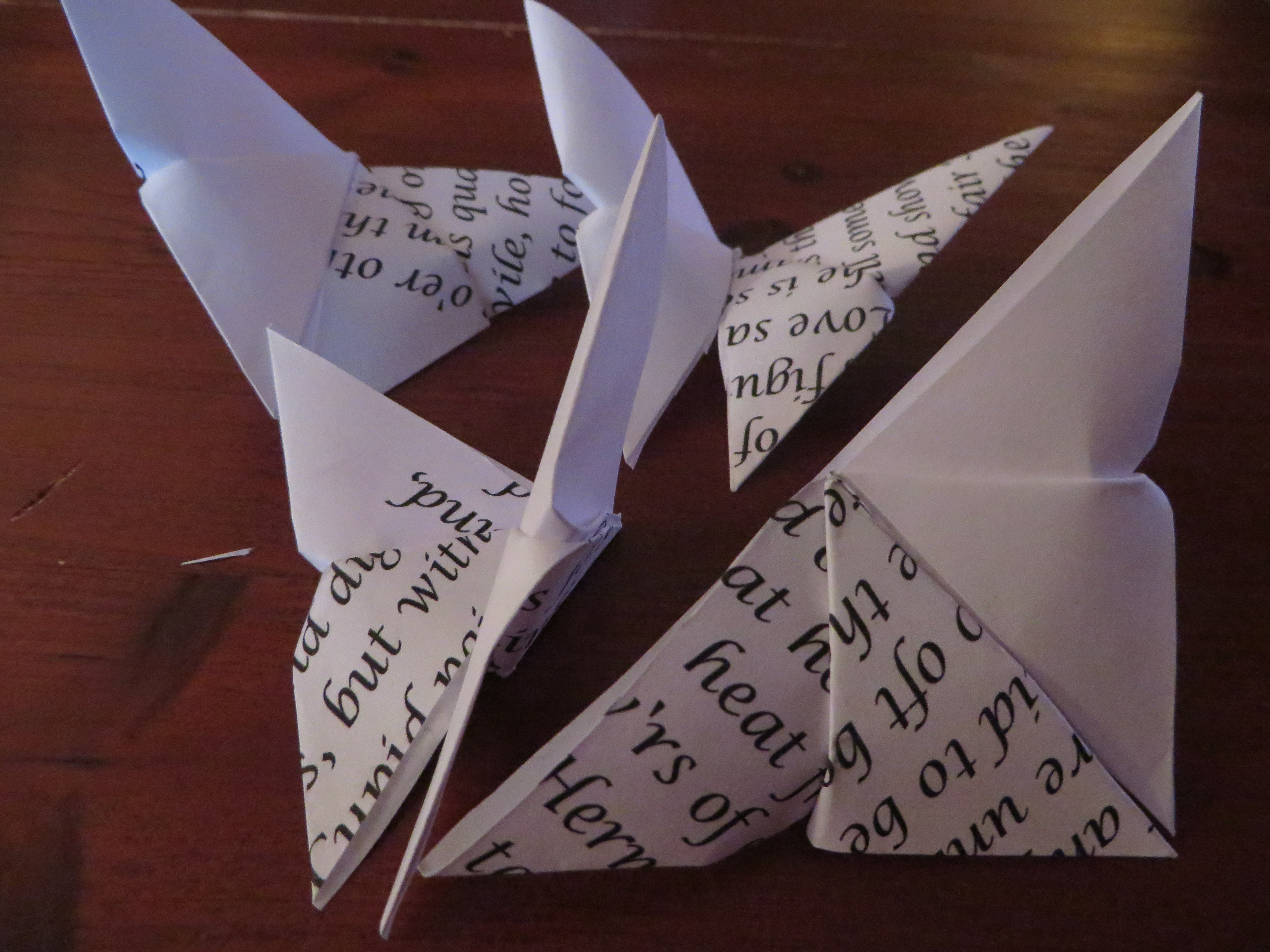 And here are the finished products! When I talk about them, the top left is #1, the top right is #2, the bottom left is #3 and the bottom right #4.

#1 only has writing on the right 2 wings. While there aren’t many words that are whole on the page, the one that is is “o’er”, which places that butterfly as the first one of the speech.

#2 It similarly only has writing on the right two wings, but I can’t make out any whole words that help give me any indication of place in the speech.

#3 The left wings this time have the text on it, but the top one hardly has any words at all. However, the word “Cupid” is on the bottom wing, so that gives it a sense of place in the speech “thus is winged Cupid painted blind.”

#4 This one also has the left two wings with text, but it has plenty of text on each one. the words “oft” and “heat” appear in whole. But the butterfly for some reason ended up formed funny (I don’t know what I did wrong).

This method really broke up the text in a funny way, and made it so that I could barely tell what part of the speech it was from. But what I love is how much more text is on the bottom of the butterfly. When you flip them over, they are full of text, but they similarly have broken up words that make it very hard to tell where it’s from.